An overview of how precleaners work, the different types, and why you need one

The story begins with the engine. Engines take energy out of fuel by burning it. Within limits, the amount, the amount of fuel an engine can efficiently burn depends on the air supply. An engine spends more than 25% of its time working as an air pump to draw air in. The use of exhaust driven turbochargers as a means of pushing more air into the engine is now quite common. It becomes obvious that a sufficient air supply is critical to the engine’s performance, and anything that excessively restricts the flow of air into the engine will cause higher fuel consumption and/or loss of power.

However, some restriction is necessary. Nothing shortens the life of an engine like “dirt”. There is really only one way for most impurities to enter the engine and that is through the intake. An air filter is a restriction to the air flow, but it is a necessary restriction and all engines have them. A precleaner to help the filter is also a restriction, but in the case of TURBO a very small restriction in exchange for very favorable results.
Yes, but how much restriction? The term “restriction” refers to the amount of vacuum that is required to draw air into the engine. This vacuum is usually measured in inches of water. On almost all types of engine (diesel, gasoline, turbocharged, etc.,) the tolerable limit of vacuum required to pull the air in is 25 to 30 inches. Thus, that is the setting on pop-up type gauges which are used to indicate when the air filter needs servicing

A good air intake system with a clean air filter should cause an initial reading at top R.P.M. of less than 12 inches. Most clean systems at top R.P.M. normally register between 5 and 10 inches of restriction, and an initial reading of 15 inches should be considered the tolerable upper limit. It should be noted that while most filter systems are correctly sized, some pieces of equipment have been found to come standardly equipped with high restrictive systems. A check with a vacuum gauge will tell the story very quickly. When a clean system reading exceeds 15 inches, changes in the air intake system which could affect a significant improvement may be possible.

A few more facts about Air Cleaners. Basically, there are two types of filter in use. The most common is the replaceable dry element type;  and the other is the oil-bath type, which is sometimes used on more stationary applications.

One thig is true about any filter being used on an engine. It is going to get dirty. /once the filter is dirty it must be serviced, and that means cleaning or replacing it.

It should be noted that the pop-up type gauges, which are pre-set only to show a high restriction reading, will never indicate that the filter needs servicing if the element has a hole in it or a damaged gasket.

Precleaners Europe are offering you the least expensive engine insurance you can buy: a TURBO Precleaner. The TURBO Precleaner greatly reduces the need for servicing the air filter by extending the life of the filter element. Less servicing means lower costs and reduced risks.

If you consider the time and expense involved in a major engine overhaul, needed as a result of air intake system failure, how can you afford to be without this “engine insurance” that we are offering.

As you enter the world of precleaners you will notice there are a variety of precleaners available and this will help you understand the similarities and differences. To begin with all precleaners have one thing in common. They all use centrifugal force to take dirt particles out of the air intake before it reaches the filter.  Exactly how they do this, how well they do it, and what happens to the dirt once it is removed from the air take are some of the things to be considered.

Precleaners can be divided into two major categories. Those that are built into the air cleaner canister and those that are placed on the air intake stack. Within the first category there are two primary types, the finned filter element type and the tube (or cone) type; and within the second are three, the clear plastic collection bowl type, the aspirated typed and the TURBO Precleaner.

A common, in-canister precleaner is a filter element with a ring of angled vanes, or fins, around it. The entering air is spun by these vanes in an attempt to throw the dirt out and down the walls of the canister to the bottom where it is collected in a dust cup. The dust cup must be emptied regularly or it may have a rubber capped valve that is supposed to empty the dirt. This is an excellent type of air cleaner and a fairly good precleaner.  However , they can develop some problems that can severely impair their cleaning ability, such as, the dust cup not being emptied properly either through operator neglect or a damaged rubber cap valve. Also, the angled vanes can become unplugged causing a buildup that prevents proper air flow.

The tube (or cone) type.

The other in-canister precleaner consists of a group of many tubes, about one inch in diameter, that have dirt separating cone units attached. The air is drawn into the cone unit and is set to spinning by the vanes within it. The dirt is supposed to spin down the cone and be funneled out of the bottom while the air turns and goes up the tube in the center of the cone and on to the filter chamber. The complete tube assembly is usually the same size as the filter chamber and can be connected to it in a variety of ways. The dirt that is funneled out of the cones, falls into a dust cup which must be either emptied regularly or may have a rubber capped valve that is supposed to empty the dirt. When new, this type of precleaner can do a good job. However, after a short period of use (especially if any moisture is a factor) the cones can become clogged. This completely eliminates its precleaning ability and adds air drag to what is already a potentially restrictive system.

A common and simple precleaner designed to mount on the air intake stack is the clear plastic collection bowl type. The air is drawn up through the bottom over angled vanes which cause the air to spin. The dirt is centrifugally separated and follows the inner wall up until it falls over the edge of and is trapped in the collection bowl, while the air turns and foes down the intake pipe. This type of precleaner is moderately efficient, but within a limited range of particle sizes. Also, when the engine is throttled down or shut off, the air flow is distributed in a way that causes some of the collected dirt to swirl up and go down the intake pipe. The real problem, of course, is that the unit does require constant attention because it must be removed and emptied often. Many times the clear plastic becomes so scratched from the spinning dirt that the operator cannot tell if it needs emptying, and so it is ignored and soon becomes ineffective.

Another type of precleaner designed to mount on the air intake stack derives its name from the key to its operation. The aspirated type of precleaner comes in many different configurations depending upon who manufacturers the unit, but they all operate on the same principle. An aspirator is a device that uses exhaust gasses to create a vacuum by means of a venture arrangement either on the exhaust pipe or built into the muffler. The aspirator is connected by a rubber or flexible metal hose to the precleaner, which uses the precleaner through fixed angular vanes. The dirt must then travel through the hose and be expelled through the exhaust. This is an efficient type of precleaner when it is new, but in a short period of time some significant problems can occur that will speed up the “burn out” of the muffler and/or exhaust pipe. The restriction placed on the exhaust by the aspirator causes back pressure which causes back pressure which can result in a hotter running, less efficient engine. Once the venture burns out (and sooner or later they all do) the exhaust fumes can be sucked through the hose into the intake air. Few things can plug an air filter as quickly as exhaust fumes. Also, it is not uncommon for the long,  dirt transfer hose to leak or clog, thus ending the precleaning ability of the unit.

The principle by which the TURBO Precleaner operates was developed as a result of the imaginative application of several laws of physics and considerable experimentation, and is covered by several patents in the U.S.A. and other countries.

How does the TURBO Precleaner work?

In a TURBO II Precleaner dirty air is drawn through the protective screen that repels stones and large debris. Carefully angled, compound vanes spin the incoming air causing centrifugal force to separate the dust and dirt from the air. The dirt spins down the wall of the main chamber, into the blower chamber, and out of the discharge ports at the base of the unit. As the air enters through the vanes at the top of the unit, it is rotating in a large radius spiral around the center dome. As the main stream of air spins down below the dome and into the intake stack, the radius of the spiral becomes much smaller. The speed at which the air is spinning increases – more than doubles- somewhat like a whirlpool; and this rapidly spinning air drives the spinner and its outer blades. Consequently, the outer blades are turning much faster than the secondary air stream spiraling down the wall and the dust and dirt that has been centrifugally separated from the main air stream. The rapidly spinning blades become a blower, drawing the dirt down and pushing it out the ports in the bottom. Also, as the rotation of the main stream of air is increased, it throws out the last bits of dust sending the cleanest possible air to the filter element. 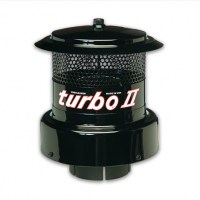